Chiba’s Calligraphy Museum Celebrates the Diverse Beauty of the Artform

Only a short trip from Narita Airport, the Naritasan Museum of Calligraphy lies in Naritasan Park, near Naritasan Shinshoji Temple. Enrich your journey into Japanese art and style by learning about the long history of Japanese formal brushstrokes, as well as the masters of the art form.

Explore the unique aesthetics of Japanese calligraphy at the Naritasan Museum of Calligraphy.

There is surprising breadth when it comes to Japanese calligraphy, in part because there are so many different ways of writing in Japan; Chinese characters called kanji, the syllabic alphabets of hiragana and katakana, as well as roman script. It is an incredible form of expression that can encompass a wide range of styles—from pieces created in traditional styles, meant to complement traditional Japanese décor, to modern variations that embody more western aesthetics. Through some 1,300 years of history, calligraphy has been an art capable of depicting the changing character of the people of Japan, and is still adored to this day.

Open to the public in 1992, Chiba’s Naritasan Museum of Calligraphy displays some of the finest Japanese calligraphy works from across the ages, with a special focus on prized pieces from the Nara Period (710-794) to the modern-day. The museum is set within a neatly pruned Japanese landscape garden, etched around a central pond, forming part of Naritasan Park. Inside the building, the green and floral color palette of the surrounding park evaporates into a large and airy atrium defined by cream and khaki tones, and giant scrolls hanging from the walls. This kind of minimalism is reflective of classical Japanese aesthetics, as seen in many of the artworks on display.

The Naritasan Museum of Calligraphy is home to a collection of more than 6,000 individual works, including pieces by famous artists and ascetics, educators, politicians, and members of the Japanese literati. Some notable pieces on display include the works of Yasunari Kawabata, the novelist and short-story writer and the first Japanese to win the Nobel Prize for Literature in 1968; Konoe Nobutada, calligrapher and poet of the Momoyama Period (1568-1600); and the prolific 20th-century artist Aoyama Sanu, whose forte was calligraphy. 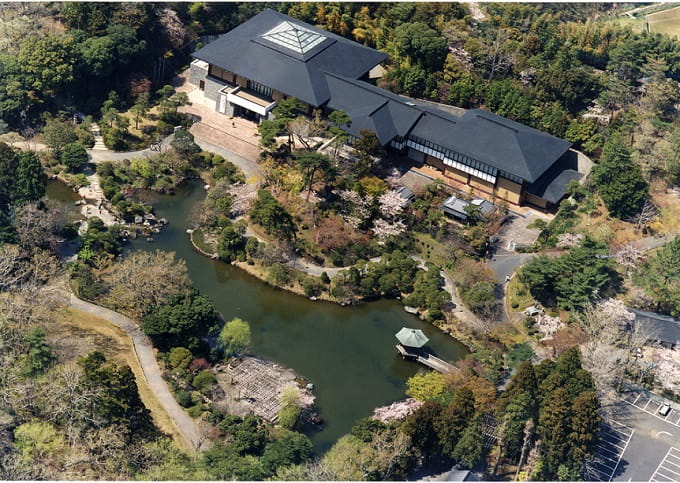 The Naritasan Museum of Calligraphy is a must-visit for any fans of the subtle, expressive art of Japanese calligraphy. It is about 90 minutes from Tokyo Station, or a 30-minute train ride from Narita International Airport, which makes a visit the perfect, contemplative way to end your journey in Japan before returning home.

Make the most of your time in and around Tokyo with our exciting itinerary ideas. Learn more about the Narita Airport Transit & Stay Program at https://www.narita-transit-program.jp/tours/tour1-narita/.

Please note that for the safety of guests, policies such as temperature monitoring and limiting the number of customers are in place.